"I didn’t expect it to, you know, grow that much," she says. "But I think that there’s a lot of people that just want to stand up for what’s right."

A street lined with Mexican flags is not something you would expect to see in predominantly white New Hanover County, North Carolina.

But that is exactly what you will see if you drive down Jessica Zambrano's street.

No, it's not a suburban enclave of Mexican families. It's one Mexican American family - and their neighbors standing with them in solidarity.

The flags began going up after Jessica and her family received a frightening letter in the mail.

“When mother fuckers like you fly your piece of shit Mexican flag, that means war. The 2nd Amendment gives the the [sic] right AND DUTY (with guns) to rid my country of people like you and your family. TAKE THE FUCKING FLAG DOWN OR FEEL MY WRATH,” the letter demanded.

The Zambranos have been flying a Mexican flag, next to the American flag, over their porch since July.

Jessica, a mother of four, says she was "shaky, like, very scared" after reading the letter. Within minutes, she was on the phone to the sheriff's department.

The Zambranos considered taking the flag down for the safety of their family, but decided against it.

"I was born in Hawaii, raised in North Carolina. And my husband is from Mexico. He moved here when he was around 20. And he is a naturalized citizen now. So we are a Mexican-American family," explains Jessica.

"I just really want my children to know where they come from, what they are, and just to be proud of who they are. And to celebrate both sides of their family.”

Once they heard about what had happened, the family's white neighbors started buying their own Mexican flags and flying them in support of the Zambranos.

"A few days after this my street was lined with Mexican flags. Neighbors standing in solidarity, letting this person know that their beliefs are not welcome here. They showed up for us in a time of need and we are eternally grateful,” writes Jessica on Facebook. 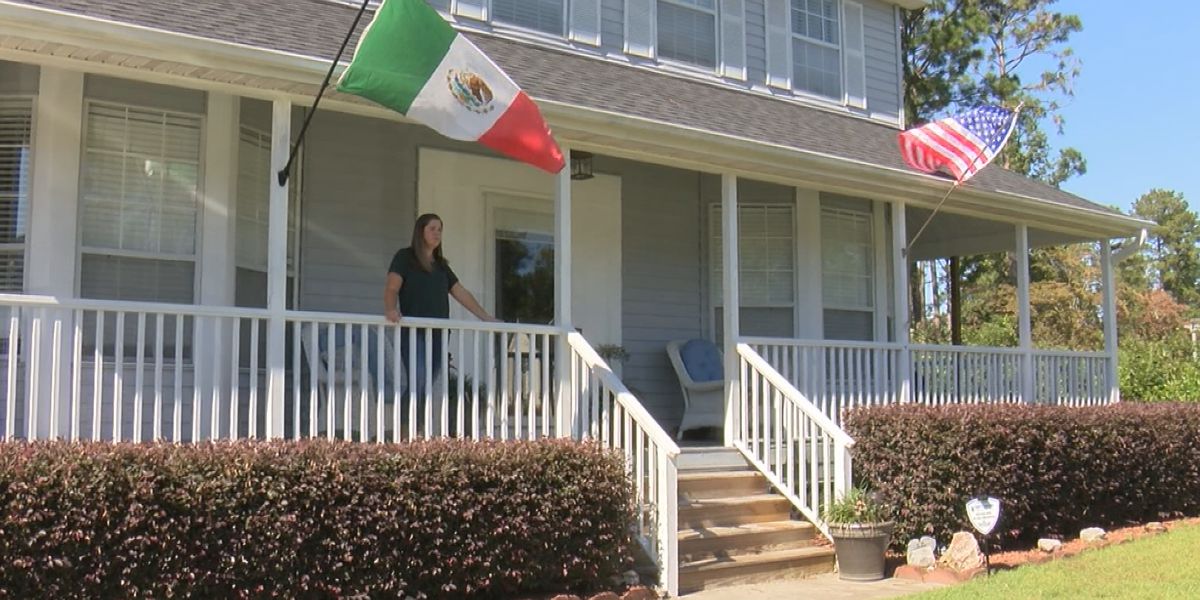 “I’m a white male. And there’s a lot of current events that don’t seem to affect me personally," says Mexican-flag-flying neighbor Kevin Millard, whose own four kids spend most of their time playing with the Zambrano children.

"It’s just kind of one of those attitudes that it doesn’t affect you until it affects you. And so that letter really brought it home for me that, that the issue of racism is not just an issue that’s on the news.
It’s something that’s local, it’s across the street for me."

The Zambranos were overawed by the wave of support they received.

"It was kind of overwhelming,” says Jessica. “I didn’t expect it to, you know, grow that much. But I think that there’s a lot of people that just want to stand up for what’s right.”

In response, Jessica published an impassioned post to Facebook, thanking supporters and calling out the author of the death threat and those who share their beliefs.

“This person and those like him/her do not represent [the] majority of true Americans," writes Jessica.

"The outpouring of support that we received from our friends and family gave us peace. It gave us hope that one day, there will be a place where behavior like this does not exist. Where our children will not feel threatened because of the color of their skin, where they came from, the language they choose to speak in public, or for simply who they are.”

I’ve been reluctant to share this but considering the current state of our nation, I feel I should. A few weeks ago we...

The death threat is being investigated by the New Hanover County Sheriff’s Department. According to WAVE3 NEWS, an affiliate of NBC, the letter’s author could face charges for communicating threats and possibly commission of a hate crime.

Jessica has made clear that the Zambranos will not back down or let this go.

“USE YOUR VOICE. Shout it from the roof tops that you will not stand for discrimination against anyone. That you refuse to allow this to go on any longer!” writes Jessica.