The number of degrees awarded to Latinos increased by 70% in the last decade.

According to a comprehensive data analysis by The National Center for Education Statistics (NCES), Latinos earned more degrees in the decade between 2005 and 2017 than ever before.

According to data, 70% more Latinos earned degrees within the past decade. https://t.co/Ey4CqFHRAZ pic.twitter.com/US6D33p3YN

But Latinos achieved the largest increase: 70%.

Latino enrollment in college is also at an all-time high, having increased by 82% in the last decade, as reported by NPR's Latino USA, while the high school drop out rate for Latino students is at an all-time low.

High school dropout rate of Latino students is at the lowest point and has been declining for decades. Meanwhile the Latino college enrollment rate is at its highest point, also over a long-term history of increase. ????#Latino #Education #TheNewMainstream #FactFriday pic.twitter.com/awxUlOnBDe

The number of Latino graduates is so large at some colleges that schools like Fresno State and Cal State University Long Beach have started holding Chicano/Latino graduation ceremonies with crowds upwards of 13,000.

The HOUSE ???? IS ???? PACKED ???? for the Chicano/Latino Commencement Celebration! #FresnoStateGrad pic.twitter.com/1qgeulbQGv

Proud of all our college students and grads, from A.A. to Ph.D. Keep up the good work raza! 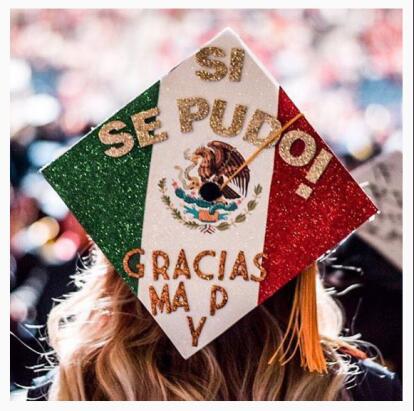