On December 12th, Catholics all over the world honor Our Lady of Guadalupe, "Patroness of the Americas" and patron saint of Mexico.

La Virgen de Guadalupe is venerated across North and South America and as far away as Israel and the Philippines, but especially in Mexico, where December 12th is a national holiday celebrated with fiestas, processions, and, of course, mañanitas.

On the Virgen's feast day, millions of Catholics make a pilgrimage to the Basicila de Santa Maria de Guadalupe in Mexico City, which houses the image of the Virgen miraculously imprinted on Juan Diego’s tilma (poncho). 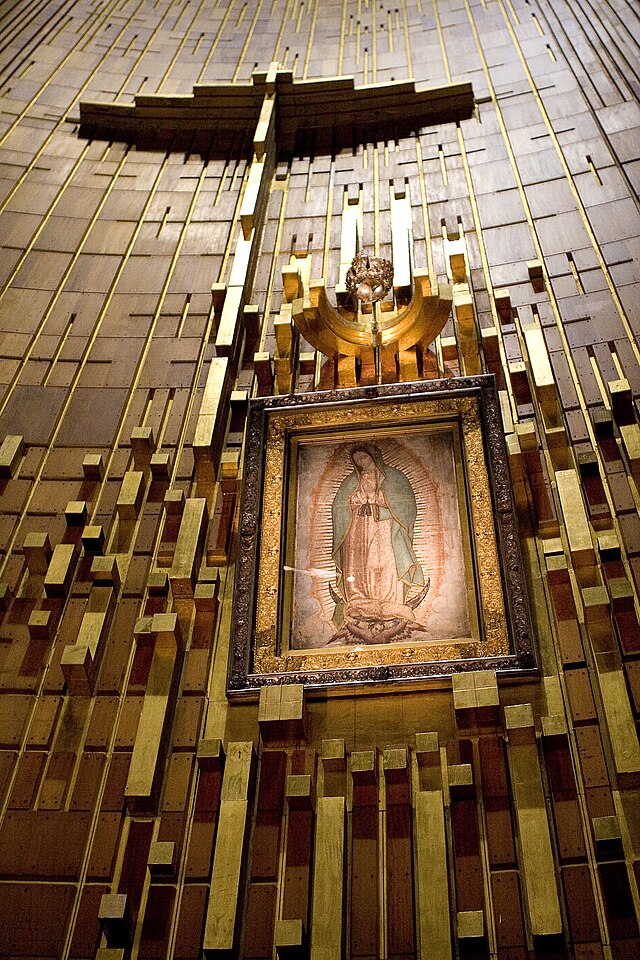 The Basilica is the most visited Catholic shrine in the world, with over 20 million visitors a year, 9 million on the Virgen’s feast day alone. 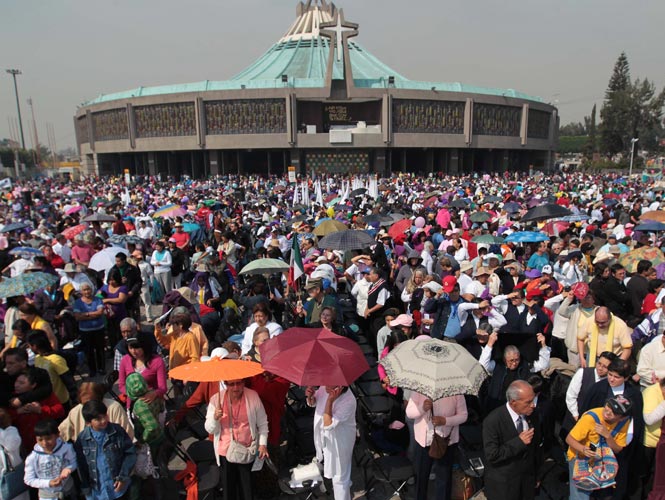 Visitors stand in long lines for hours just to get a glimpse of the Virgen and light a candle in her honor.  Many have traveled great distances, sometimes on foot.

Pilgrims will often crawl down the aisle to the altar on their hands and knees.  The most devoted even crawl their way across the large stone plaza outside the church, leaving their knees bruised and bloody.
Bullet-proof glass protects the Virgen's image, which is still in excellent condition after almost 500 years, even though later decorations have flaked or rotted away.  Scientists cannot explain the extraordinary preservation. 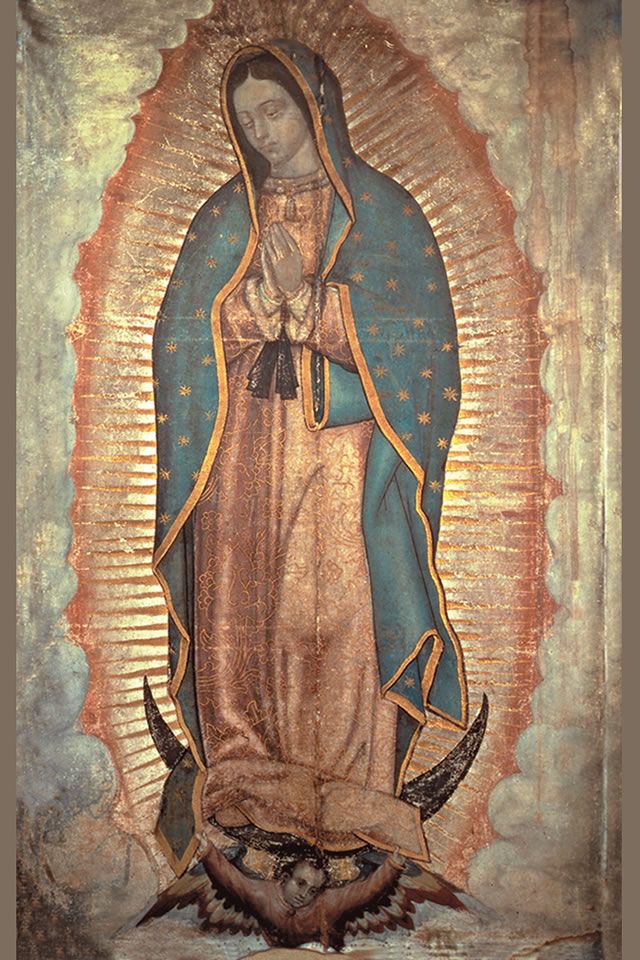 Why is the Virgen de Guadalupe so widely and devotedly revered?  Here is her story…

La Virgen de Guadalupe appeared to Juan Diego, an "indio", to ask that a church be built in her honor on the Hill of Tepeyac.  The bishop refused, but Our Lady worked miracles to make it happen.

On the morning of December 9th, Juan Diego, an Aztec who had been baptized into the Catholic faith, was walking over the Hill of Tepeyac when a beautiful young woman surrounded by light appeared to him.
The woman had dark skin, hair, and eyes, just like Juan Diego, and she spoke to him in his native tongue, Nahuatl. 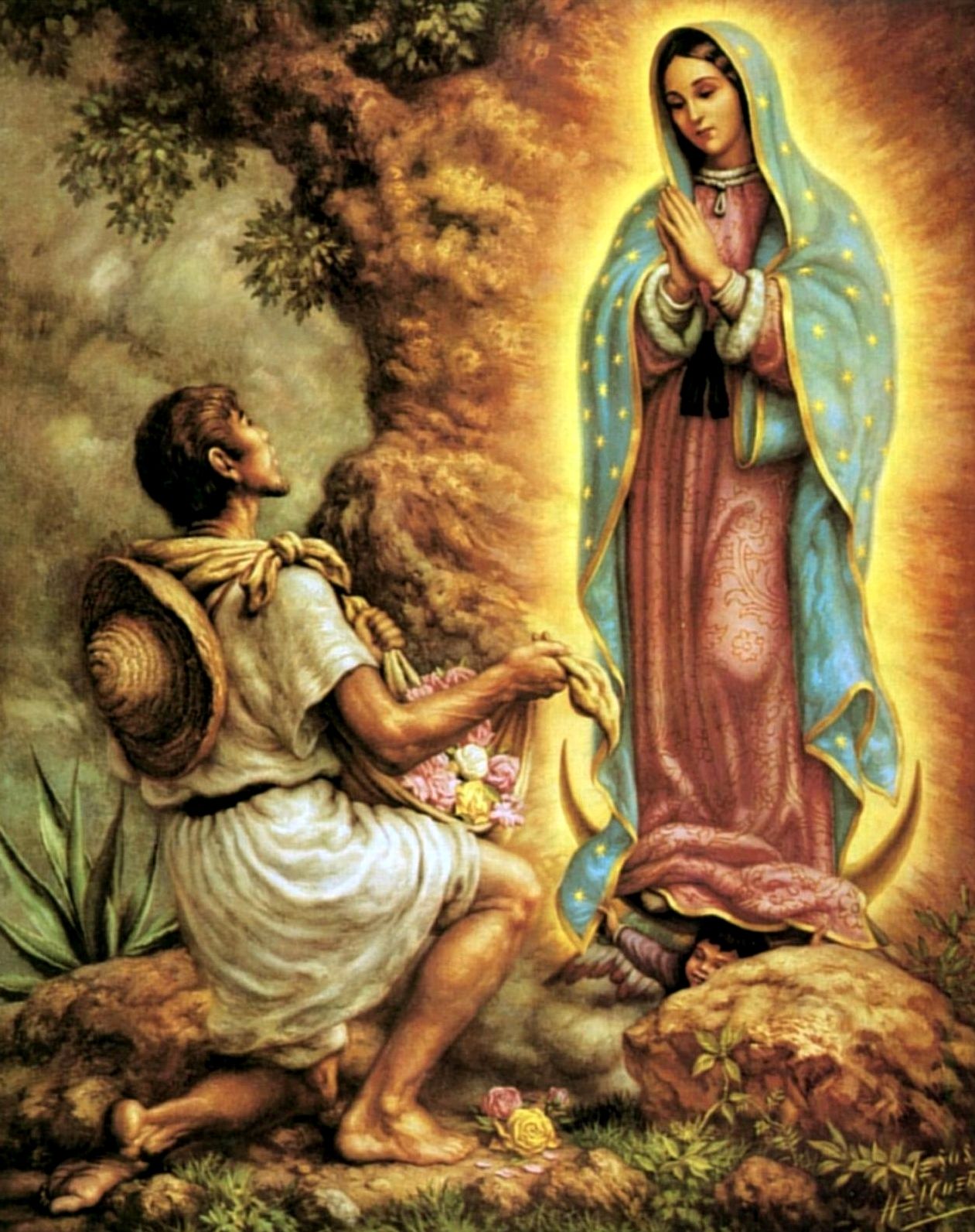 The shining morena told awestruck Juan, that she was the “mother of the one true God,” and asked him to build a church in her honor on that very spot, where a temple to the Aztec mother goddess Tonantzin once stood.
Although he was afraid, Juan Diego went directly to the archbishop of Mexico City, Friar Juan de Zumárraga, who, of course, did not believe him.  The Spanish considered indigenous people inferior: Why would the Blessed Mother appear to a lowly indio?
The Virgen told Juan Diego to keep trying, so he did, though confronting an important church official was a dangerous thing to do.
Because Juan was an indio, and he described the Virgen as being brown-skinned like himself, the bishop did not believe him, and asked for a miracle to prove that the woman he described was truly the Holy Mother. 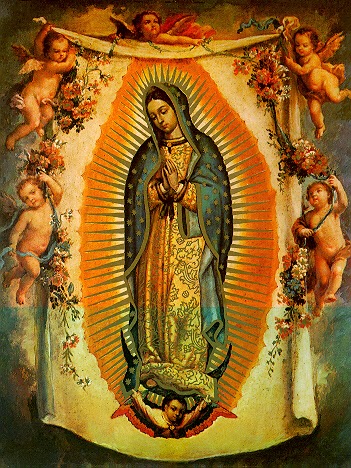 But Juan Diego’s uncle was very sick and getting worse, so instead of meeting with the Virgen the next day as he promised, Juan stayed home to take care of him.
The Virgen then appeared to Juan for a fourth and final time, gently scolding him for not trusting in her mercy and miracle-work.

She cured Juan Diego's uncle, and told Juan he should go to the top of the Tepeyac to collect proof for the archbishop.  There, Juan Diego found roses blooming, in the dead of winter, Castillian roses which are not native to Mexico. 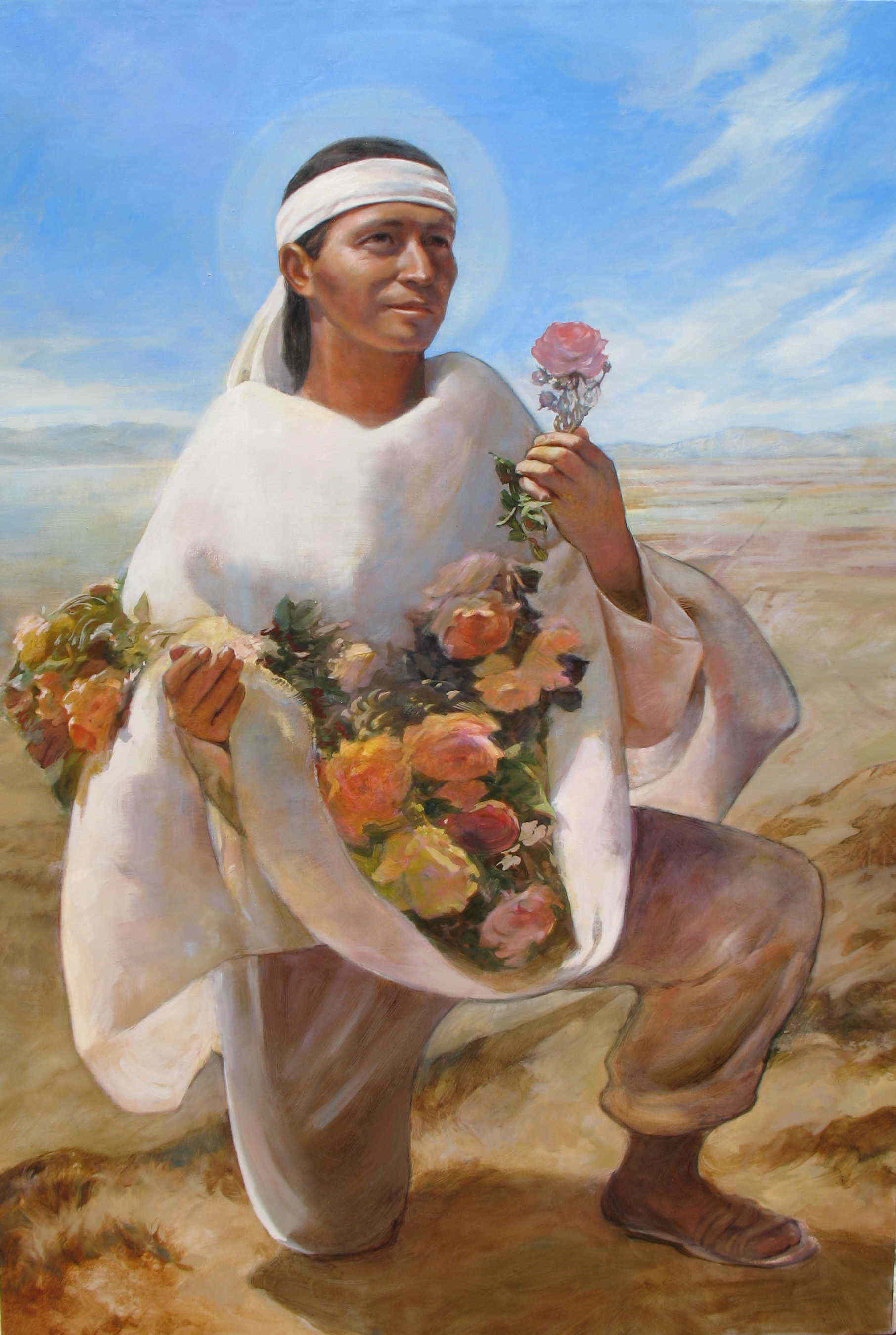 Juan Diego loaded up his poncho with roses and went back to the archbishop.  When he let the flowers fall at the bishop's feet, the image of La Virgen de Guadalupe was left emblazoned on his tilma.  Finally, the archbishop believed.

The Virgen is often called “mi morenita” because her brown complexion is part of what makes her so special.

The Virgen appeared to a darker-skinned indigenous man, someone that the Spanish considered inferior.  By appearing to Juan Diego, the Virgen showed that everyone is equal in the eyes of God, and equally deserving of grace.

The Aztecs saw themselves and their mother goddess Tonantzin reflected in the Virgen morena, who looked and spoke like them.
After her appearance, they became more willing to accept the Catholic faith, blending their indigenous culture with Spanish Catholicism to create our modern-day Mexican culture. 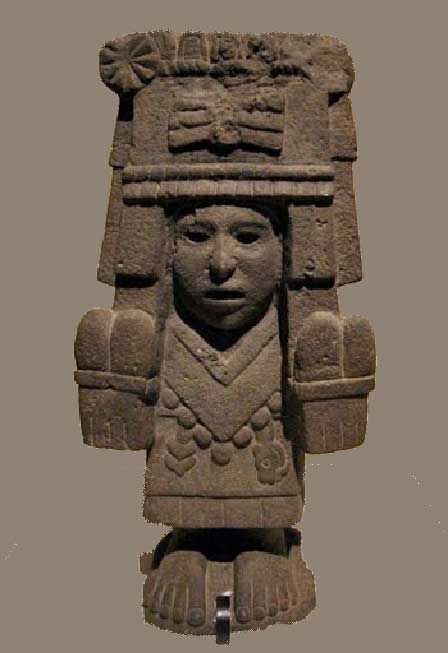 Statue of the mother goddess Tonantzin

Likewise across Latin America and even the Philippines, wherever indigenous and Spanish-Catholic cultures combined, La Guadalupana is not only the Holy Mother, she is the mother of mestizo culture.

Revolutionaries like Zapata carried her banner in battle and victory, and we continue the tradition today, wearing and displaying her image proudly, La Guadalupana, our most powerful and unifying cultural icon.