While most low-income Mission families know the need for being connected, they often don’t know how to get started. This is especially true of immigrants—newcomers to this country with myriad tech options from which to choose. That’s why the goal of today’s sixth “Get Connected!” event, held at MEDA’s Plaza Adelante, was to help parents learn the best ways to keep their children safe online while optimizing the use of educational apps. For the youngsters, the goal was to whet their appetites for all things tech while creating an app in an hour.

Google presented the event, with volunteers such as Hector Mujica (photo above) teaching a class called “High Seas” in a lab packed with fourth- to eight-graders. “High Seas” focuses on computer science taught in a playful, age-appropriate format.

To combat the lack of connectivity in the neighborhood, families signed up for a high-speed internet plan for as low as $10 a month. One sign-up was by Carmen Ramos, who explained that the $40 price per month she had formerly been quoted by an internet provider was not feasible given her family’s tight budget. A smile crossed Carmen’s face when asked how her being able to sign up today for just $10 per month would change her family’s life. She explained, “My son is a third-grader at Cesar Chavez Elementary, a Mission Promise Neighborhood school. We have been going to the library for the past year, but that takes time. Now my child can study at home, as it should be.”

There was a Technology Career Panel on hand, explaining how they wound up in tech—sometimes via serendipity. The panel comprised: Caitlin Crump, senior data scientist at LinkedIn; Roberto Mejia, IT support engineer at Jones IT; Alberto Melgoza, financial planning and forecasting systems tech lead and solutions architect at Google; and Kamilah Taylor, senior software engineer at LinkedIn.

Raffles for six laptops were held, with four elated young winners hardly able to tote the computer they were handed. Of the two adult winners, one was Carmen Ramos, excited that she now added a computing device to the low-cost internet for which she had signed up earlier in the day. 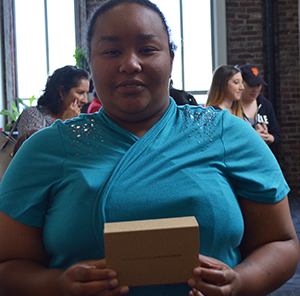 There were also 10 Google Cardboard certified viewers raffled off. This innovative product offers virtual reality on your smartphone once an app is downloaded.

Lunch was generously donated by Pollo Campero, with hearty plates of chicken, rice and beans served up by DoubleDutch volunteers.

In addition to Google’s Presenting Sponsorship for “Get Connected,” there was additional sponsorship from LinkedIn, DoubleDutch and Microsoft.

Stay tuned for details on the next “Get Connected!” event, and connect your family to tech.