This is the little known history of the 141st regiment, Company E, the U.S. Army's all-Mexican-American unit.

Originally a unit of the National Guard, these brave Chicanos were involved in some of the deadliest and most crucial battles of WWII's Italian Campaign.

The all-African-American Tuskegee Airmen, the all-Japanese-American unit of the 442nd infantry, their stories are well known. "However, while Latinos were awarded more Medals of Honor per capita during World War II than any other minority group, their stories have remained in the shadows," writes Frank Medina in From Barrios to Battlefields.

Now, thanks to writers like Dave Gutierrez, author of Patriots from the Barrio, "the men who served in the U.S. Army’s all Mexican American infantry unit [are] finally receiving recognition for their service." 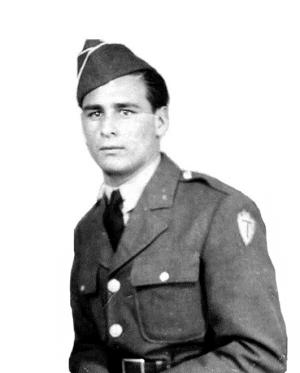 Pfc. Ramon Gutiérrez charged a German machine gun nest, firing his until his rifle was shot out of his hands...then he kept going.

Dave is the descendant of Ramon Gutiérrez, one of the members of Company E of the 141st Infantry Regiment, 36th Infantry Division, tbe U.S. Army's all-Mexican-American WWII unit.

Originally the longest standing unit of the Texas National Guard, Company E was federalized in the 1940s and young Mexican-American recruits from the barrios of South Texas were assigned to the unit.

According to Dave, these young Chicanos not only spearheaded the Allied landing at Salerno, Italy, they saw some of the deadliest action of the entire war, including the crossing of the Rapido River, during which 2,000 men of the 36th division lost their lives.

Nobody could doubt the bravery of the Latino recruits, who won more medals per capita than any other minority group.

Dave's own pariente, rifleman Ramon Gutiérrez, was awarded not only the U.S. Army's Silver Star, but the Russian Order of the Patriotic War for his valor in charging a German machine gun nest that was picking off the men in his unit during the landing at Salerno. Ramon was shot and dropped his rifle, but he kept going, grenading three enemy soldiers and taking down the last with his bare hands.

When asked about his actions that day, Ramon replied: "I thought I was going to die that day, so I didn’t care about what happened to me."

Ramon was captured twice, and managed to escape and return to Allied lines both times. He survived many battles, and, ultimately, the war, marrying and raising a family with his wife Consuelo Sanchez, a Navy Wave.

Although Ramon is exceptional, he is also exemplary; his story is the story of the hundreds and thousands of Chicanos and Latinos who served in WWII, like Sgt. Rafael Q. Torres of El Paso, who, according to Medina in Barrios to Battlefields, led his squad at the Salerno beachhead, facing German tanks with a grenade launcher and a rifle. He was one of six Torres brothers who served in the war.

"They came from places like Del Rio, Uvalde, Sonora, Kingsville and El Paso, Texas, and I didn’t want these men and their sacrifices to be forgotten," author Dave Gutierrez told Medina.

"These soldiers and their families served this nation when their country needed them the most. They were true American patriots who happened to come from the barrios of Texas."