Learn how SIRI is programmed to help you, when you are getting pulled over.

There's a big new feature for iPhone experts this year: It's called Shortcuts, and with a little bit of logic and know-how, you can stitch several apps together and create a script that can be activated by pressing a button or Siri.

Some of the early uses are predictable: Saving Instagram photos, sharing the song you're listening to, or creating a morning routine that activates your lights and plays a song.

But Robert Petersen of Arizona has developed a more serious shortcut: It's called Police, and it monitors police interactions so you have a record of what's happened.

Once it's installed, you just have to say: Hey Siri, I'm getting pulled over.
Then the program, available on Reddit, pauses music you may be playing, turns down brightness on the iPhone, and turns on Do Not Disturb.

While it's difficult to tell how many people have downloaded the Shortcut, it's the third most popular post of all time on the burgeoning subreddit dedicated to sharing Shortcut recipes, and it's been widely covered in the Apple enthusiast press. It's on version 1.4 and changes so far have focused on bug fixes and additional service support, like iCloud Drive.

You can examine all the steps a Shortcut takes and all the apps and services it uses — so you can be sure that the script isn't, say, uploading your data to a random server when you use a Shortcut you didn't write. The entire recipe for Police can be accessed in the Shortcuts app. 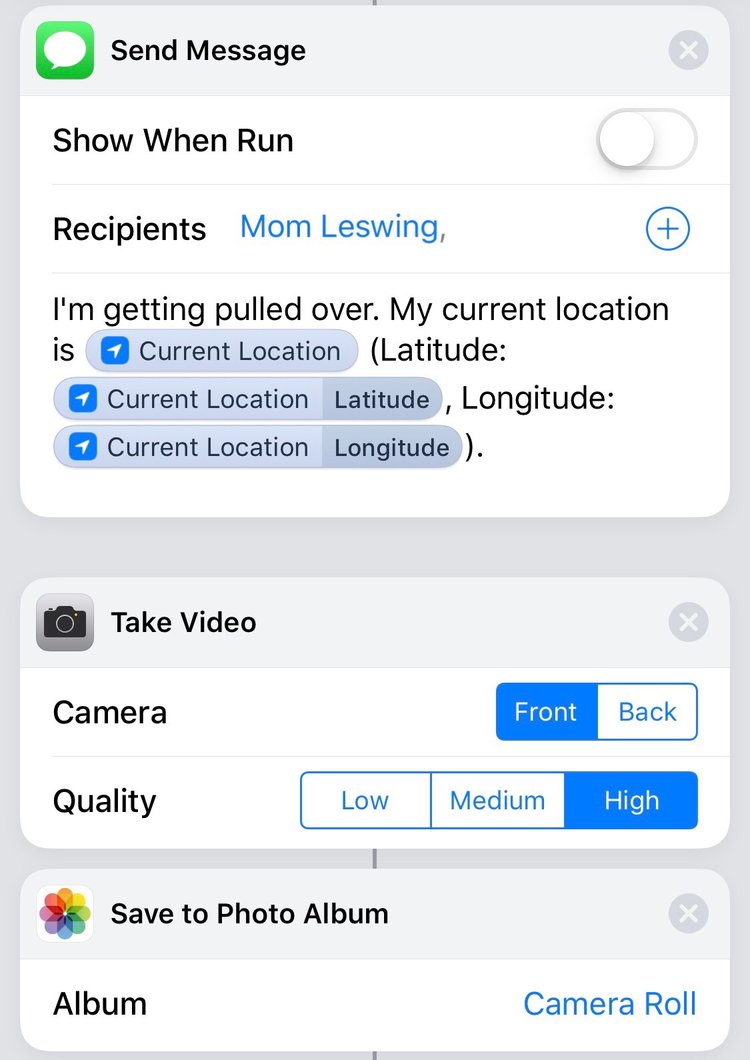 Peterson says he doesn't have a background in programming, but he knows enough to get around, and has written scripts for MacOS in the past. He says he's an Apple fan, and that he's surprised that Apple has introduced this kind of feature for power users given the company's tendency to keep things simple and locked down.

You can download the Police shortcut here. Make sure you have the Shortcuts app installed.